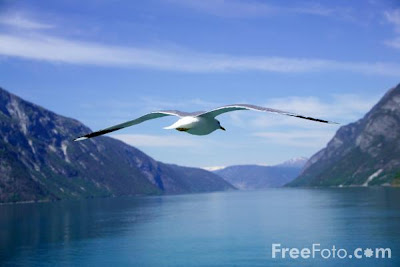 Angels, spirits of light
Utter His praise in flight
Through the day and night
Never tiring of this rite.
Birds poised amid land and sky,
Mountains standing firm and high,
Clouds unfolding like cotton buds,
The wind whispering hymns of love,
All praise the One Most High,
Obey His will until they die.
The thunder roars aloud His glory
The rain cries tears of humility;
Trees spread out their limbs in prayer
Leaves tremble from His fear;
Waves break down on the shore
The sun bows down before His Throne.
But who stands perplexed amidst this scene?
Who knows not purpose, plan or scheme?
Who wanders aimless in a world of plan?
Who can find peace nor joy nor calm?
When will he see the signs within?
Hear the speech of the Highest One?
When will he join the obedient ranks?
Surrender his will to a higher plan?
Allah needs us not,
It is we who depend,
The universe is enough to praise Him Alone,
If we rebel, He can replace us with more.
Posted by Ume Abdullah at 1:25 PM No comments:

A TALE OF TWO MOTHERS 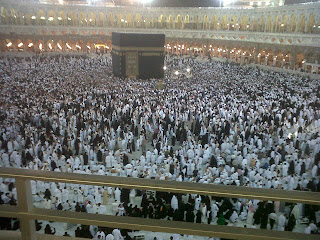 We had gone to Jeddah in December 2010 to perform umra. Unfortunately my son fell ill while we were on our way to the haram. When we reached Makkah, his fever grew worse. My brother-in-law who lived in Jeddah, sat with him in the courtyard while my husband and I did tawaf and then close to the sa’i area while we did sa’i. 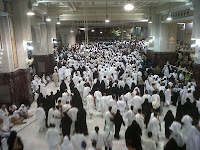 For the first time, I tried to feel what Sayyedah Hajra must have felt as she ran between the hills of Safa and Marwa, looking for water for her thirsty child. We all perform sa’i every time we do Umra, the men even run between the green lights in imitation of that woman’s endeavor, but we don’t really feel the anxiety and trepidation that must have gripped her heart. I don’t think I ever walked so fast or so continuously in any sa’i as I did that day, as it is quite a long walk. But I knew my son would be crying, sick and waiting for me to return. After every round, I would check my cell phone to see if there was any emergency message from my brother-in-law. I was torn between my worry for my son and the important task at hand, as must have been the case with Sayyedah Hajra. She had to find water and her son was crying all alone.
Yet there was a huge difference in our situations. She had put her complete trust in Allah, to the exclusion of all humans, even her husband who had left her in a deserted valley bereft of trees or springs or people. She had remained behind, knowing that Allah had ordered this test so He would come to her help. She had not sat idle waiting for Divine succor to arrive but had shown her determination and need by running from one hill to the next for help. She showed what a mother feels for her child. And then Allah, Whose love for his creatures surpasses that of any mother, sent an angel to set forth a supply of water that has never dried up even after hundreds of years have gone by.
I was surrounded by throngs of people and Sayyedah Hajra was all alone. I was walking on marble and she on sand, clambering up the rocky slopes of Safa and Marwa. I was in a ventilated, covered corridor, she under the unrelenting, scorching sun. I could drink endless glasses of Zam Zam during my ritual sa’i, her lips were as dry as her sons. My son was lying on a carpet, under the fan with his uncle and brother, with cool water to drink. Her baby was lying alone in the open desert, vulnerable to snakes or dehydration, even death. I had the Ka’aba to look at and remind me of Allah, the multitude of worshippers to give me strength and keep me going. She had the loneliness of the desert, the separation of her beloved husband and no human to give her solace, no idea of the honour Allah would bestow on her, no idea that she was going to raise a Prophet of Allah, no idea of the House of Allah that same son and husband would build.
Yes, we were worlds apart and any amount of effort or sacrifice I could make for Allah, paled in comparison to what that great woman had done. No wonder, then, that Allah ordained that anyone who wishes to perform Hajj or Umra, cannot do so without completing the ritual of walking between the two hills. This is to remember the sacrifice and effort of one woman who agreed to leave her husband, her homeland and everything she loved, to start anew in a desolate valley, where there was neither habitation nor civilization. There she made her home and raised her child and let others build their communities, and there she helped lay the foundations of the centre of Tauheed for all Muslims - the Ka’aba.

Let us not forget that, when we go to Safa and Marwa. Let us remember the lesson Hajra taught us in our own lives. Let us not hold on too tight to all that we love and are comfortable with in this world, because new things come into existence with change. Every new life is born after pain, labour and sacrifice. A new life may be waiting for us only if we let go of the old one, if we stop resisting change, if we put our trust in Allah. So let Allah mould our life according to His plan for we do not know what destiny holds in store for us.
فَمَا أُوتِيتُمْ مِنْ شَيْءٍ فَمَتَاعُ الْحَيَاةِ الدُّنْيَا ۖ وَمَا عِنْدَ اللَّهِ خَيْرٌ وَأَبْقَىٰ لِلَّذِينَ آمَنُوا وَعَلَىٰ رَبِّهِمْ يَتَوَكَّلُونَ
"So whatever you have been given is but (a passing) enjoyment of this wordly life, but that which is with Allah is better and more lasting for those who believe and put their trust in their Lord." (Ash-Shura: 36)
Posted by Ume Abdullah at 1:42 PM 10 comments:

Ume Abdullah
I am currently a (partially) homeschooling mom of 2 sons, Pakistani by origin and residing in Saudi Arabia. I love reading and writing ever since I can remember. When I discovered the Quran and Islam's true beauty in my college days, it became my first and last love inshaAllah. I want to share that with everyone. I also travel to different countries and have been living in atleast three. I hope my observations and experiences may benefit others too.